Her Majesty Queen Rania Al Abdullah of Jordan is an international voice of cross cultural dialogue, an outspoken philanthropic advocate, and a promoter of advancing health and educational opportunities in Jordan and across the globe.

Since her marriage to His Majesty King Abdullah II Ibn Al Hussein (then Prince), in 1993, Queen Rania has channeled her energies behind initiatives that aim to improve the livelihood of various sectors of society in Jordan and beyond.

Queen Rania has played a significant role in reaching out to the global community to foster values of tolerance and acceptance, and increase cross-cultural dialogue. Regionally and internationally, Queen Rania has campaigned for a greater understanding between cultures in such high profile forums as the Jeddah Economic Forum, the Kennedy School of Government at Harvard University, and the Skoll Foundation in the UK.

One of Her Majesty’s core areas of interest is the promotion of excellence, creativity, and innovation in education. In October 2005, in an effort to raise the national standards of education, Queen Rania, in partnership with the Ministry of Education, initiated an annual teacher’s award. Known as the Queen Rania Al Abdullah Award for Excellence in Education, the award has been well received amongst the Kingdom’s teachers both for the prestige it brings to the profession as well as the motivation it inspires.

As the Regional Ambassador for INJAZ Arabia (Junior Achievement World Wide), Queen Rania is a strong supporter of the organization. INJAZ is a non-profit entity that inspires and prepares youth and enhances their opportunities to join the job market as competitive employees and entrepreneurs. Since launching INJAZ in Jordan in 2001, Queen Rania has taught several of their classes, joined youth around the world in frank dialogue sessions, and launched INJAZ’s presence elsewhere in the Arab world.

Most recently, Queen Rania established the Kingdom’s first hands on children’s museum, in Amman, to encourage and nurture lifelong learning for children and their families. The museum opened its doors to the public on May 23, 2007. It has more than 150 dynamic exhibits designed for children aged 14 and younger, who comprise almost 40 percent of Jordan’s population. Queen Rania has said that her aim in creating this museum is to provide edutainment opportunities to all of Jordan’s children.

Since 1995, the Jordan River Foundation (JRF), which Queen Rania chairs, has spearheaded a number of local initiatives improving the quality of life for Jordanians. The foundation has initiated socio-economic projects for women that provide employment opportunities to enhance their livelihood, while developing their knowledge and skills in handicraft production and entrepreneurship. These projects benefit thousands of individuals, directly and indirectly, and continue to generate income for vulnerable communities and families.

In 1997, Queen Rania oversaw the launch of JRF’s Child Safety Program, which for the first time in Jordan addressed the immediate needs of children at risk from abuse. She is closely involved with Dar Al Aman (House of Safety), a center for abused and neglected children, the first of its kind in the Middle East.

As part of her mandate to contribute to improving the quality of life of all Jordanian families, Queen Rania serves as the head of the National Council for Family Affairs (NCFA). The council aims at ensuring the right policy environment to support the development of family protection and unity, and serves as a significant think tank in Jordan.

Queen Rania is on the Board of Directors of several international organizations such as the World Economic Forum (WEF); the United Nations Foundation (UNF); International Youth Foundation (IYF); the Foundation for International Community Assistance (FINCA); and the GAVI Fund, a non-profit organization that seeks to provide children in the world’s poorest countries with access to life-saving vaccines. Her Majesty is UNICEF’s first Eminent Advocate for Children and is also the World Health Organization Patron for Violence Prevention in the Eastern Mediterranean Region.

In recognition of her social work, Queen Rania has been presented with numerous awards for her commitment to promoting world peace, advancing social causes, and lifting the lives of children.

Born Rania Al Yassin, to a notable Jordanian family of Palestinian origin, in Kuwait on August 31, 1970, Queen Rania completed her primary and secondary education there.

After receiving her bachelor’s degree in Business Administration from the American University in Cairo, in 1991, Queen Rania returned to Jordan to pursue a career in banking, followed by a brief career in the field of Information Technology.

She is fluent in Arabic and English, and has a working knowledge of French. 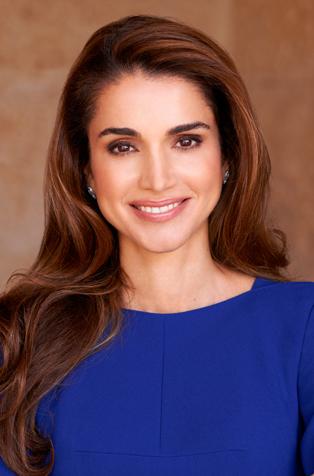