His Majesty King Abdullah II Ibn Al Hussein is the 43rd generation direct descendant of the Prophet Muhammed. King Abdullah assumed his constitutional powers as King of the Hashemite Kingdom of Jordan on February 7, 1999, the day his father, the late King Hussein, passed away. King Abdullah is committed to building on the legacy left by the late King Hussein to further Jordan’s democratic institutionalization and political pluralism, while working for a just and comprehensive peace in a climate of openness and tolerance.

Born in Amman on January 30, 1962, His Majesty is the eldest son of the late King Hussein and has four brothers and six sisters, as well as two sons and two daughters. King Abdullah began his education at the Islamic Educational College and received his secondary education at St. Edmund’s School in Surrey, England, Eaglebrook School in Massachusetts, then at Deerfield Academy in the United States of America. In 1980, King Abdullah entered the Royal Military Academy Sandhurst in the United Kingdom, where he received his military education.

King Abdullah attended Oxford University in 1984, undergoing a one year Special Studies course in International Politics and World Affairs. Upon returning home, His Majesty continued his military path, gaining experience and working his way to the rank of Captain and the Commander of a Tank Company in the 91st Armored Brigade. From 1986 -1987, also as Captain, his Majesty was attached to the Royal Jordanian Air Force’s Helicopter Anti-Tank Wing as a Tactics Instructor, where he received qualification as a Cobra Attack Helicopter Pilot.

In 1987, King Abdullah II attended the School of Foreign Service at Georgetown University in Washington, D.C., and was in residence as a Mid-Career Fellow. He undertook Advanced Study and Research in International Affairs under the auspices of the Master of Science in Foreign Service Program.

Upon returning home, His Majesty was assigned to the 17th Tank Battalion, 2nd Royal Guards Brigade and in the summer of 1989, he became Battalion 2nd-in-Command, with the rank of Major. In 1991, King Abdullah was the Armor Representative in the Office of the Inspector General. He was promoted to Lt. Colonel at the end of the year and assumed command of the 2nd Armored Car Regiment in the 40th Brigade.

In addition to his career as an army officer, King Abdullah II has served his country many times in the official capacity of Regent in the absence of His Majesty King Hussein, and he regularly traveled with the late King Hussein. Before his accession to the throne, King Abdullah II represented Jordan and his late father on visits to many countries throughout the world, and developed close relationships with leaders and officials of a number of Arab countries during the course of his career.

King Abdullah is a qualified frogman, pilot and a free-fall parachutist. His other interests are car racing (he is a former Jordanian National Rally Racing Champion), water sports, scuba diving and collecting ancient weapons and armaments. 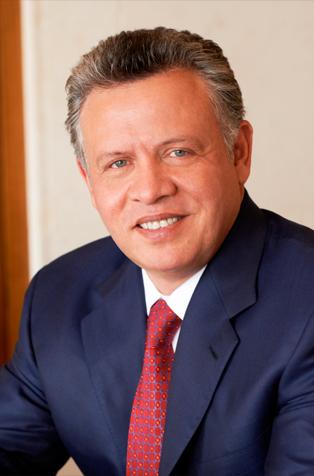